The plans include a new street light at the Highland Street intersection and four additional street lights along the streets.  The design follows Village Code requirements that street lights are spaced no greater than 300’ and are 25’ tall aluminum poles with 10’ clamp-arm brackets.

The luminaires were originally designed to be LED, 3000K color temperature, 8,780 lumens similar to the Phase I project.  However, the luminaire has been changed in response to public input.

The Village Board asked the Public Works Department to re-evaluate the design based on resident concerns.  Issues reviewed were brightness of the luminaires, spillover light onto adjacent private properties, spacing of poles, and color of poles.

Two recent residential street lighting projects (Willow-Cypress and Randview Highlands Phase I) included LED, 3000K luminaires.  These lights are an industry standard specification for residential streets.  However, residents from the Phase II project area have expressed concern about their brightness.

A light meter was used to document readings at ground level directly below the street light, the property line on both sides of the street, and between street lights.  Readings were taken on Eastwood Avenue (LED luminaires) and Catalpa Lane (high pressure sodium luminaires) as a comparison.

Shields were then installed on the three LED luminaires on Eastwood Avenue that were part of the evaluation.  New readings showed a reduction in foot-candles on the far side property line lower than Catalpa Lane.  Foot-candle measurements directly below the street light remained the same.

A new generation of LED luminaires with a 2700K color temperature and reduced glare lens were then installed on Prospect Manor Avenue at three street lights.  The luminaires included a shield to reduce spillover light onto properties.  Readings showed foot-candle measurements directly below the light, at the property lines, and between lights lower than Catalpa Lane.  The readings, however, appear to still meet the minimum recommended values at/near the street light per guidelines from the Illuminating Engineering Society (IES).

Village Code requires street light poles to be located at intersections and spaced no greater than 300’ along the street.  Poles were installed between 250’ and 300’ along those streets in Phase I and designed with similar spacing in Phase II.  They are typically placed between two homes at the property line and clear of underground utilities, driveways, and trees.  A quick online search indicated nearby communities typically space street lights between 150’ and 300’.  In Ciorba Group’s Residential Street Lighting Program Review dated September 7, 2017 for the Village of Mount Prospect, poles are to be spaced no greater than 205’ to meet minimum recommended values per IES guidelines for the entire length of the street.  Village Code currently does not require the entire length of the street to meet IES guidelines.

A request of residents in the Phase II project area is to paint the poles black.

Black-coated poles, arms, and luminaires are also utilized at various locations throughout the Village.  However, their use has been limited to business districts and major roadways.  Presently, the Village owns 467 black-coated streetlights.

The cost to procure black-coated streetlight poles, arms, and luminaires is negligible when compared to aluminum poles.  However, coated poles, of any color, are more expensive to maintain over the lifetime of the asset.  Essentially, bare aluminum poles require no maintenance other than bulb or luminaire replacement.  Coated poles must be re-painted every 7-10 years.

Presently, it costs about $600 to paint an installed pole.  The Village spends about $40,000 each year to paint the existing 467 poles already painted black (on a 7-10 year cycle).  Painting the Randview Highlands Phase II poles black introduces a basis for painting all residential streetlights black, including the existing 425 bare-aluminum poles.  If implemented, this course of action could double maintenance expenditures for streetlight poles.  Staff does not endorse such an elective cost increase without an identified source of funding.

A Neighborhood Meeting was held on July 29, 2019 at Village Hall to discuss the project.  Of the 173 households invited, approximately 15 people attended the meeting.  The Director of Public Works provided information on the project and answered questions from the group.  Some spoke in support of the project while others shared concerns/opposition.

The recommendation is the pole spacing will remain as designed.

The recommendation is poles to remain aluminum without a painted finish.

Utility Dynamics Corporation is under contract with the Village for Phase II of the Randview Highlands Street Light Project.  The 20 poles and arms have been fabricated and delivered to the Village.  The new LED, 2700K luminaires have been ordered and are expected to be delivered before the start of construction.  It is anticipated the project will be completed before the end of the year. 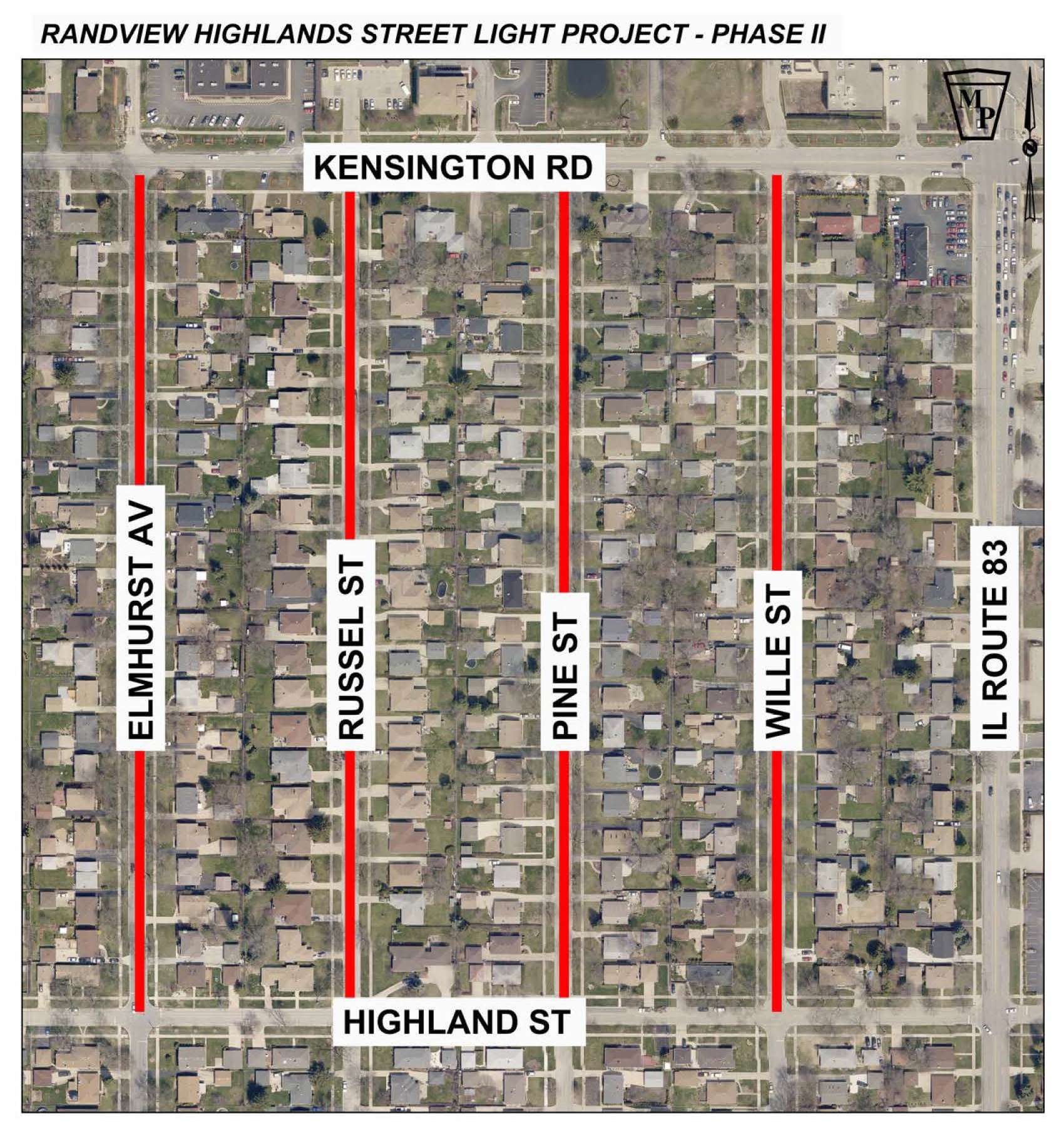 How can I get more information?

Call the Public Works Department (847) 870-5640; or email to publicworksdept@mountprospect.org