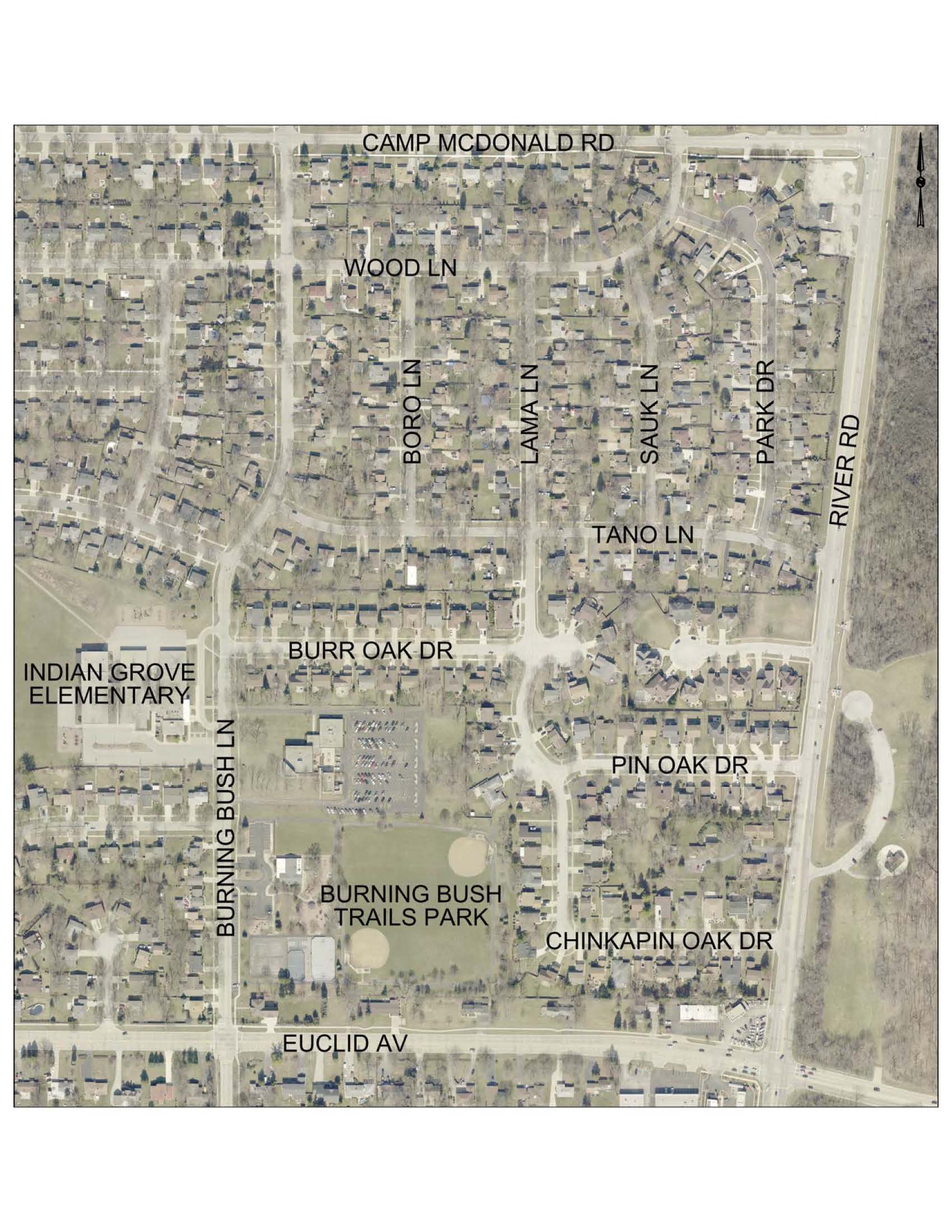 The Village of Mount Prospect & River Trails Park District will soon begin construction of a storm sewer and detention pond project in the Burning Bush Trails Park and along Lama Lane. The Contractor, DiMeo Brothers Construction, is scheduled to mobilize and start preliminary work beginning Thursday, November 14th, weather depending. You will notice traffic control barricades and signage being set up during this week. Construction is anticipated to begin the week of November 18th.

The project consists of installing large 54" diameter storm sewer pipes starting at the intersection of Tano Lane & Lama Lane. Installation of the storm sewer will continue south on Lama Lane and will connect into the Burning Bush Trails Park. The park fields will be excavated to provide a large detention basin. The basin will be utilized for storm water detention during heavy rain events and will include the complete reconstruction of two baseball fields with short retaining walls for seating, new dugouts, staircases and handicap-accessible ramps. An underdrain system and irrigation system will also be installed throughout the basin.

Construction of the detention basin and installation of the large storm sewer pipes will help reduce the risk of recurring surface flooding endured by homeowners in the area.

This project was an outcome of a detailed study of drainage basins tributary to Levee 37.  The drainage study was completed in 2015 by Christopher B. Burke Engineering.  To view details of the study visit Levee 37 Drainage Study.

As the sewer is installed along Lama Lane, there will be daily street closures with a signed detour route. All neighborhood streets will be open at the end of each working day. There will be no interruption to services such as mail delivery, garbage pick-up, leaf pick-up, snow plowing, and emergency response. The Village will work to minimize the inconveniences created by the project and appreciates your patience during construction.

March 19 - Progress is being made despite the State of Emergency and the unfortunate circumstances of the COVID-19 pandemic. Restoration and clean up along Lama included topsoil, seed, and blanket has been completed. The field excavation is 100% complete. Installation of the field underdrain pipe has been completed. The 54" pipe coming into the field has been blocked with a "balloon" to prevent the field form being flooded. All four staircases have been installed. Irrigation pipe in field bottom have been complete. The stone subbase of the north ball field has been installed. The fence and dugout fence posts at the north and south fields have been installed. At the south ball field, dugout/bleacher concrete walkway areas are complete. The north tiered wall has been excavated and a stone base has been installed. The installation of the north tiered wall is tentatively scheduled for this week.

February 26 -  The drain system is coming along as the underdrain and sprinkler system work continues. Crews are also respreading topsoil in the park.   Staircase work has begun last week. You will also notice crews begin installing the backstops for the baseball fields this week.

January 27 -  Crews have successfully laid approximately 1,000 feet of 54 inch pipe. They have also completed the backfilling and concrete patching along Tano and Lama. Now they are continuing to excavate the park and are about 50-60 % complete. To date, they have hauled 1,500 truck loads of dirt stockpiling it for future use. Next, they will install the underground drain system. The drain system is spider webbed in design with about 8,500 feet of 4 inch pipe spreading out in all directions. The system will collect rain water and quickly absorb it into the storm sewer allowing for continued use of the soccer and new baseball fields at ground level.

January 13 - Crews resumed work last week,  continuing to lay the 54 inch pipe. Within the next two weeks, they will have it installed to the park.  Next, they will focus on replacing the stone patch that lies on top with concrete patch. This week, crews have stripped the top soil in the park and stockpiled it for reuse.  Additionally, they are beginning the excavation work in the park to prepare for the underground storage pipes. These pipes will be approximately 10 feet deep.

December 17 - The junction chamber will be complete the week before Christmas. Crews will begin backfilling by the end of the week. The intersection is slated to be open at Tano & Lama no later than December 20. Also beginning the week before Christmas, crews will begin lying 54 inch pipe on Lama. Each day, 80-100 feet will be installed moving forward. Crews will work until December 23 and then have a Christmas break resuming work on January 6.  Burning Bush Trails RIB 12-2019

November 25 - The week before Thanksgiving crews were out saw cutting the pavement for the sewer trench. These clean cut segments allow for pavement to be removed easily.  Beginning the week of December 2, the asphalt will be removed where the saw cuts were and then the junction chamber at Tano & Lama will be installed.

Will services to my home be affected?

There will be no changes in your regular services such as garbage pick-up, mail delivery, or emergency services from the Police and Fire Departments.  Please use caution when driving and walking through the construction zone.