Sod is installed from April through November by an approved contractor through the Village’s bid process. Sod is best laid in the early spring before Memorial Day and early/late fall after Labor Day. Sites requiring restoration are tracked throughout the year and then completed at the appropriate times. Unless by special request, sodding is not completed during the summer months of June, July and August because of the high watering requirement. Restoration may be needed for a number of reasons and are not limited to the list below. The Village is responsible for restoration in the event of a utility dig up or infrastructure upgrade. The restoration provided is either sod or dirt and seed. Any other disruption to the parkway, either by property owner or contractor, is restored with sod.

Utility Dig-ups – When an excavation is required to repair Village owned underground utility, the crew will restore the area. The crews fill with stone or sand until directed to restore the area. During the summer months, restoration will be made with dirt and seed. If dirt and seed fail, the Grounds Division will put the location on a fall sod list. These include, but are not limited to, water main repairs, sewer repairs, b-box repairs, and hydrant repairs.

Failed Turf – Sod is used to replace the failed turf in areas around public buildings. The turf is inspected and a Turf Inspection Form is used (Appendix L)

Plow Damage – To be considered for sod repair, plow damage must exceed 2 feet in width and 10 feet in length.

Public Works Operations – Public Works routinely complete projects throughout the year. Some of the projects include, water main break repairs (Water Division), and sewer line repairs (Streets Division). In addition, the Engineering Division completes street resurfacing and sidewalk installation programs that occasionally require sod for restoration. Through interdivisional communication, the Forestry & Grounds Division is informed of the project and then the work is scheduled for sod installation.

Private Property Utility Digs – From time to time residents will be obligated to make emergency private sewer repairs. When this occurs, they often dig up in both the street and right-of-way. These locations require sod after construction is complete. When instructed, the Forestry/Grounds Division will repair the parkway only. The criteria for the sewer repair sodding is usually either an emergency or the homeowner has the long run to the main which means they have to break or cut the street and curb to make their repair.

Dirt and seed is used March through December. It is purchased from the awarded vendors through comparison pricing. It is not limited to any contracts and is used in specific locations listed below.

Plow Damage – Unless criteria is met for sod, all areas that have been identified as plow damage receive dirt and seed only.

Uneven Parkway – Uneven parkways are inspected and addressed on a case by case basis. Typically minor imperfections are addressed through dirt and seed.

Root Shaves – Root shaves are restored with dirt and seed.

On September 3, 2002, Village of Mount Prospect officials unveiled a unique sculpture created by Michigan artist Jack Eppinga. The sculpture, called “Next Generation,” was carved from the trunk of one of Mount Prospect’s largest trees. The “Next Generation” depicted an elderly woman with her grandson, pausing before a grove of large trees. The boy stands ready to plant the small tree seedling being given to him by his grandmother. Several symbols of the woman’s lifelong love of nature-- an owl, squirrel, songbird and raccoon--look on. 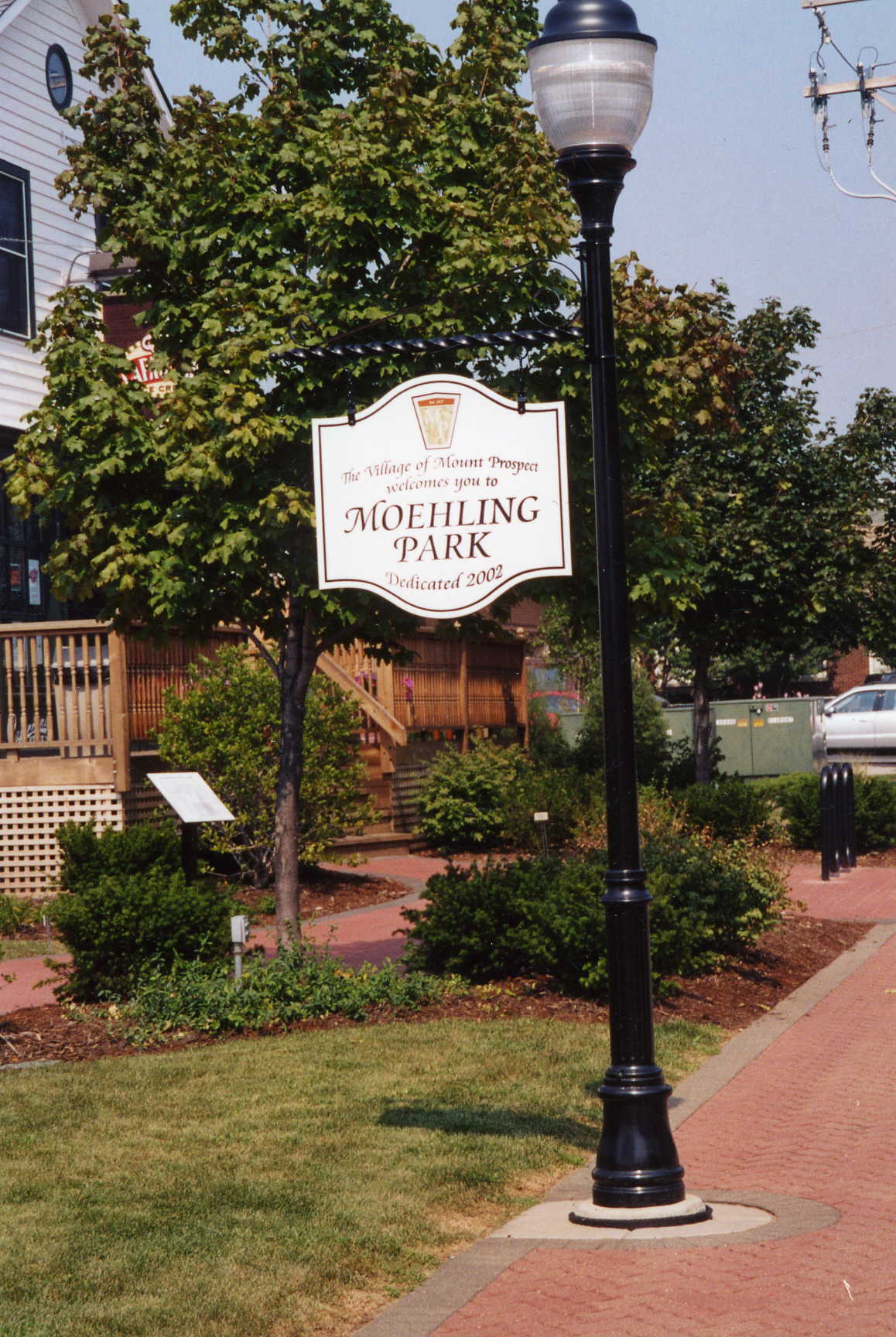 The idea for the sculpture was conceived in 2000 by the Village’s Forestry/Grounds Superintendent, Sandy Clark. She saw the sculpture both as a memorial to earlier generations, and a sign of hope for the future. “I’m hoping that ‘Next Generation’ will invoke gratitude toward our forebears who had the foresight to plant and care for trees that would benefit future Mount Prospect residents. These men and women recognized their duty to pass along a sense of stewardship to the generations who followed. I also hope that ‘Next Generation’ will inspire today’s youth to carry on the traditions begun by their elders, and to know that they can positively impact the future through their actions today,” Clark said.

The American Elm tree whose trunk was eventually carved to make the sculpture had been growing for many years in the parkway at 118 S. Albert Street. It was cut down in March 2001. At that time the tree was Mount Prospect’s largest parkway American Elm. Its trunk measured 52 inches in diameter and its branches spread for more than 100 feet. By counting the stump’s growth rings, the Public Works Forestry Division determined that the tree had been approximately seventy-five years old. Thus, it was likely one of the first trees planted in Mount Prospect in the years following the Village’s incorporation in 1917.

Clark’s supervisor, Public Works Director Glen Andler, decided that the sculpture would fit in nicely with the park’s historical background. Keith Kuhn, one of Clark’s staff, had prepared the landscape design for the park. Even though the installation of the landscaping had already begun, early in 2002 Clark asked him to change the design slightly to accommodate the new sculpture. Eppinga was hired.

The sculpture was ready by May to be moved to the park site. Through a unique combination of efforts from the Village’s Engineering, Vehicle Maintenance and Forestry Divisions, a plan was devised to transport and place the sculpture. After a specially designed steel plate was built and attached to its base, the sculpture was lifted with a crane onto a tractor. Then it made the trip on its side down Central Road to the park. There it was gingerly placed on a concrete base specially designed to support its weight.

Losing the sculpture in the park was a bit heartbreaking, but it gave the Public Works Department an opportunity to figure a new use for the space that it would vacate.  The park itself had transformed over the past twelve years and its original intentions of being a meeting place for the community had been accomplished.  The amount of foot traffic and use the park continues to generate is impressive.

After much consideration, the Public Works Department decided to install a Gazebo in the location where the sculpture once stood.  Rather than hiring a company to install the gazebo, the Forestry/Grounds Division used their skills and talents to erect a 16 foot hexagon shaped gazebo.  This has allowed for a new gathering space that has become a local focus for small venue band jam sessions, talent shows, seating, and even wedding pictures.

Now, the park itself has been established for over 18 years.  Many of the original plants, shrubberies, and trees have grown to mature heights and the park has changed its form and presentation from the original design plans.  To keep with current design elements and practices, Keith Kuhn, the original designer of the park, has begun to start a three phase re-design process.  During this process many of the park’s main elements will be retained, but some schemes will be changed to accommodate for the maturing trees that are nearing full mature height.

Located just east of Centennial Apartments South on Centennial drive is a property known as Centennial Park.  This 100,000 square foot parcel was purchased by the Village of Mount Prospect form the Dell Corporation to incorporate a park within the Village’s infrastructure.  This park contains many key attributes that have created a very pleasing atmosphere.

Within the park you can find a small picnic grove that contains three picnic tables and a trash receptacle located at the west end of the park.  Throughout the park are an additional three benches along the walking path that leads to Westgate Rd.  On the far east end along Westgate Rd. is a butterfly garden with a bench and a trash receptacle.  As far as the flora of the park, there are over 10 different genus of trees, many at mature height, that provide ample shade to many of the seating areas and picnic grove.

The butterfly garden on the east end was a recent addition in 2017.  In coordination with the Public Works Department and Boy Scout Troop 155, by the leadership of Gianni Rago, they completed the butterfly garden.  Gianni led approximately 15 boy scouts to help plant the garden that he designed, and was rewarded his Eagle Scout Badge for his efforts.  The Village has also registered this butterfly garden as a Monarch Waystation to add to its efforts of our Mayor’s Monarch Pledge.

Centennial Park is a true gem nestled in a neighborhood.  If you haven’t had the time to visit this park, it is worth the stop.  Many species of butterflies and birds have been observed here.  So, go ahead and pack a lunch, grab a Frisbee, and enjoy this park. 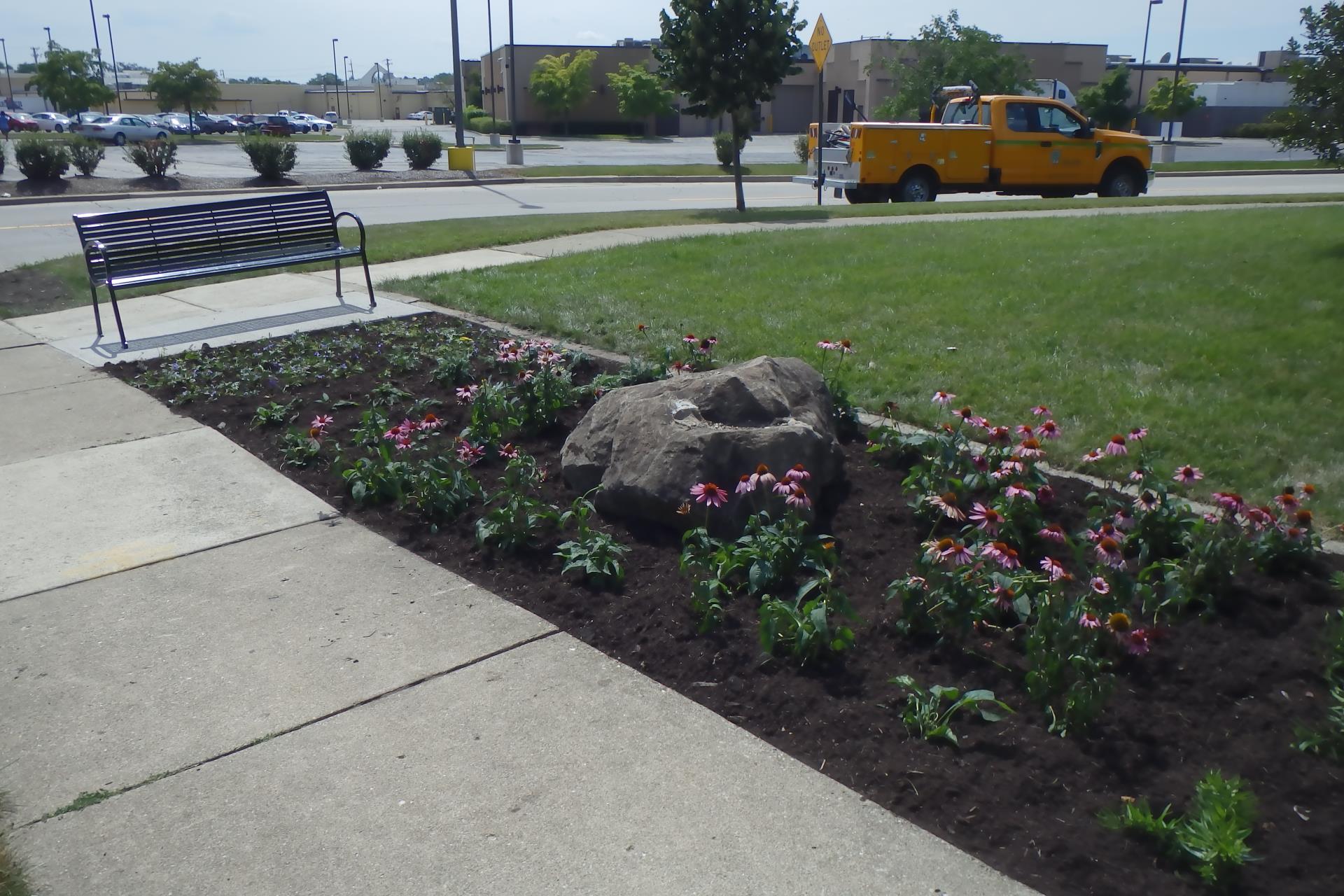 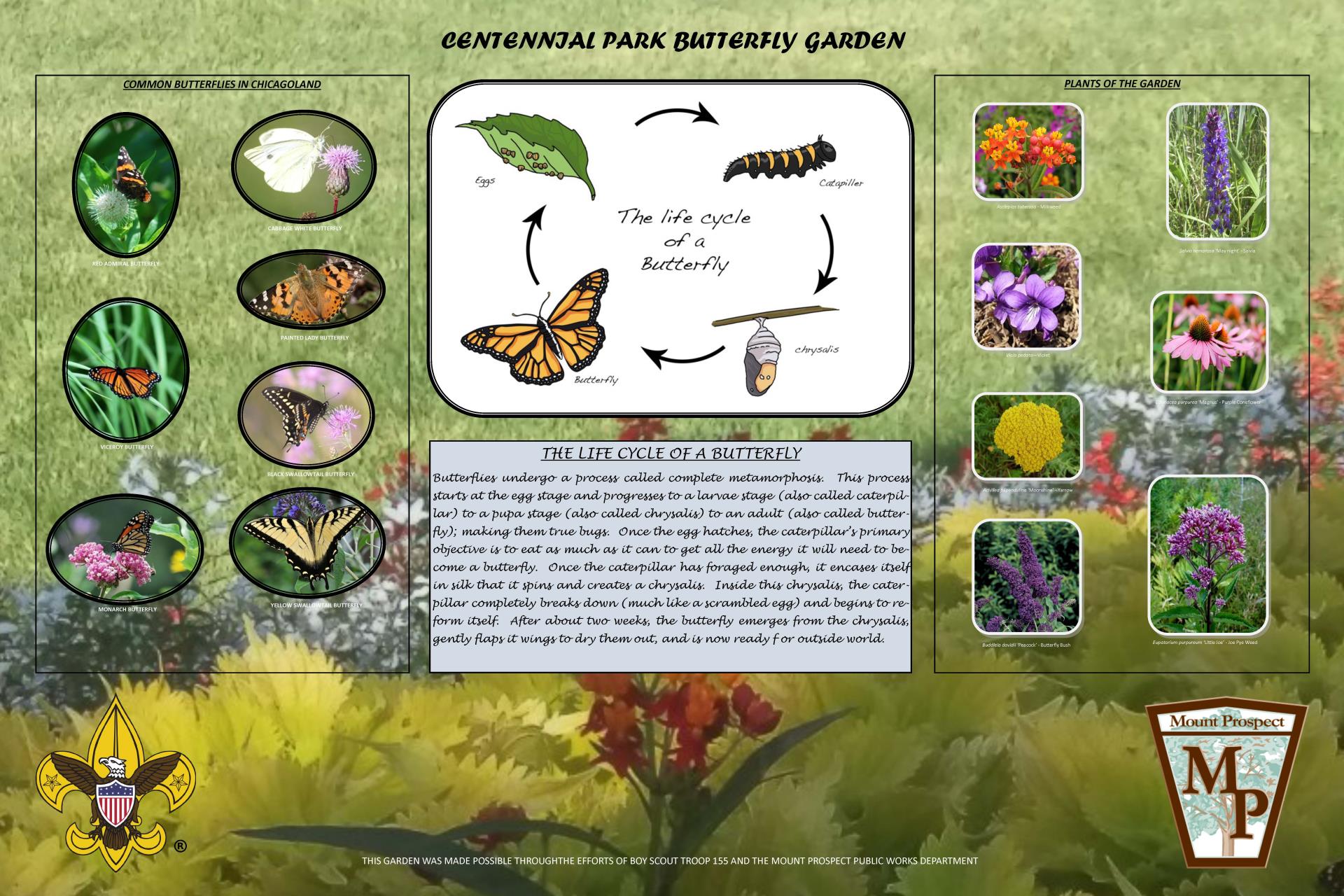 Floating blissfully amongst the breeze, gently flapping their wings as they land with upmost precision… the butterfly.  Mount Prospect has become a haven for butterflies of all types, but most especially the Monarch Butterfly.  Concerned for their decreasing numbers over the years due to loss of habitat and pesticide use, the Village of Mount Prospect has committed to the Mayor’s Monarch Pledge.  Through this pledge, our Village has promised to support and provide areas of our greenspaces that allow for habitat zones for the Monarch Butterfly.  These zones include plants, such as Milkweed, that provide food, respite, reproduction zones, and a place to lay their eggs.

The Village has received additional efforts from the Garden Club of Mount Prospect as well as the Mount Prospect Monarchs group to not only help provide these areas, but also to raise community awareness and have a further depth to all.

Through this process, the Village has registered a number of locations, six to be exact, as Monarch Waystations.  Specifically in these areas plants and habitat are provided that make zones to support the Monarch effort.  We have even doubled our efforts at many of these zones to be able to include other species of butterflies, bees, and many types of birds.  Some of these locations, at the peak of the season, are a truly an observers dream.  Humming Birds, Finches, Swallowtails, Monarchs, Honey Bees, Viceroys, and on and on, can be viewed at these locations. 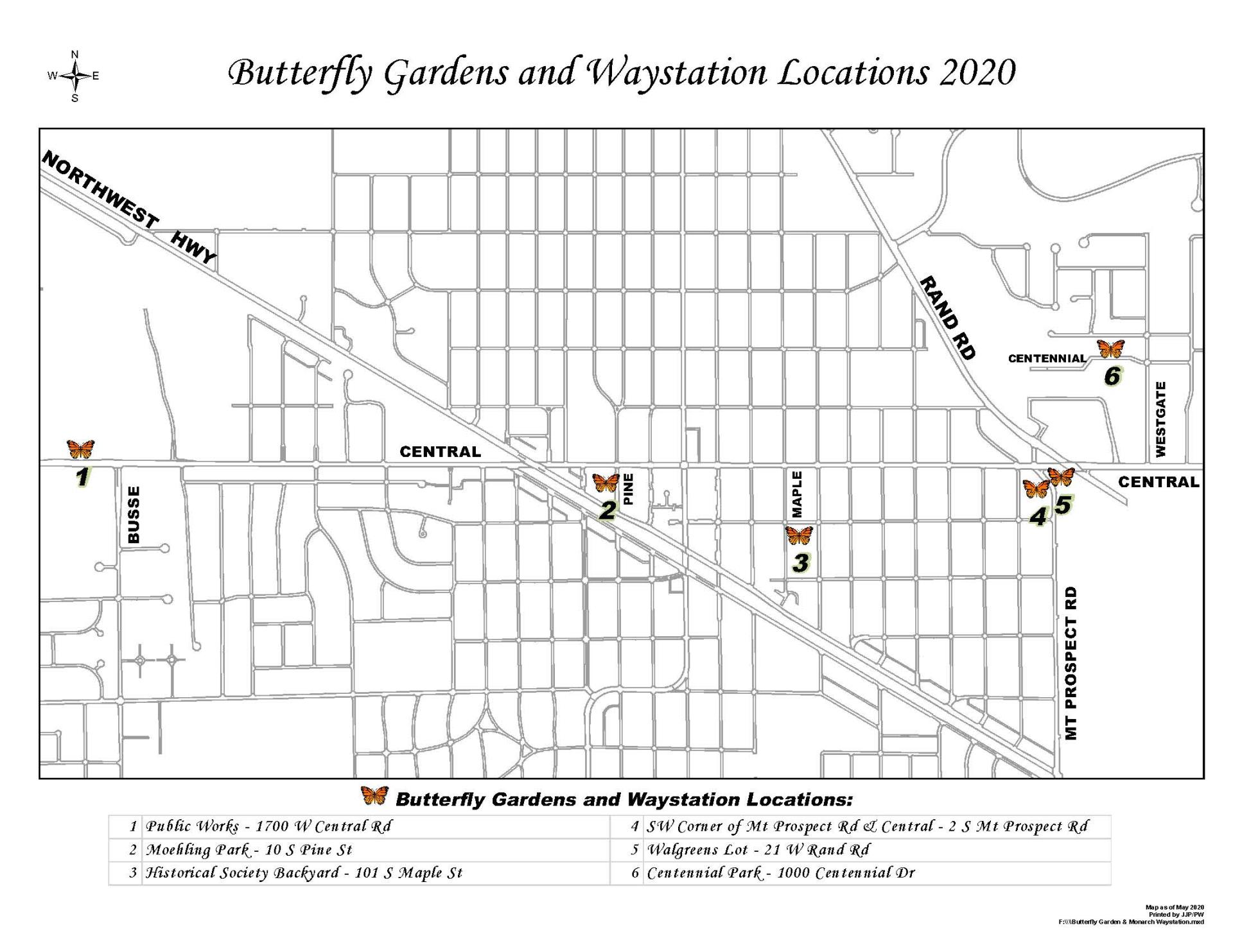 Take a look at the map of their migration and breeding.

The Village maintains an inventory and tracks all trees that have the capacity of being lit, the color of lights, the type of style in which they are strung, and the amount of strands they receive. 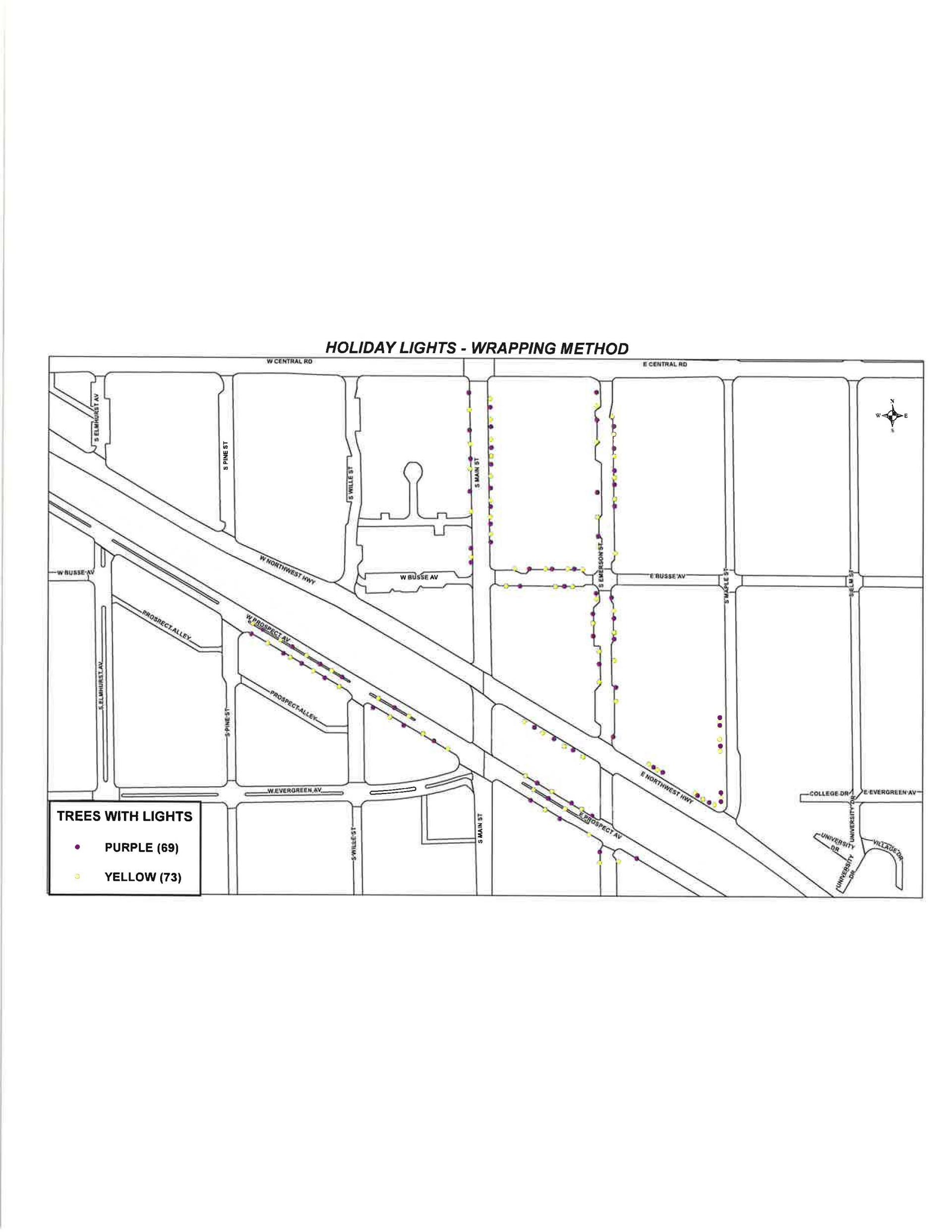 Encompassed throughout many neighborhoods and right-of-ways in the Village are giant splashes of color.  Every winter, the Forestry/Grounds Division of Public Works creates designs to enhance the beautification of our town.  We go through a design process that selects the best annuals for all the elements of design, from heights to colors to textures and attractors, to present a display that is continually talked about and complimented from our residents, businesses, and even neighboring towns.  With four dedicated staff members to provide these displays, Public Works holds no bounds to provide world class exhibits of annual bedding flowers.

There are currently 15 dedicated locations for annual display flowers throughout the village.  Yearly, the Village plants over 20,000 plants to fill the approximate 12,000 square feet of annual beds.  Over 40 different types of annuals are selected in various patterns to make our displays.  Take the time to see these areas.  Some of them are simply noticed just by driving by. 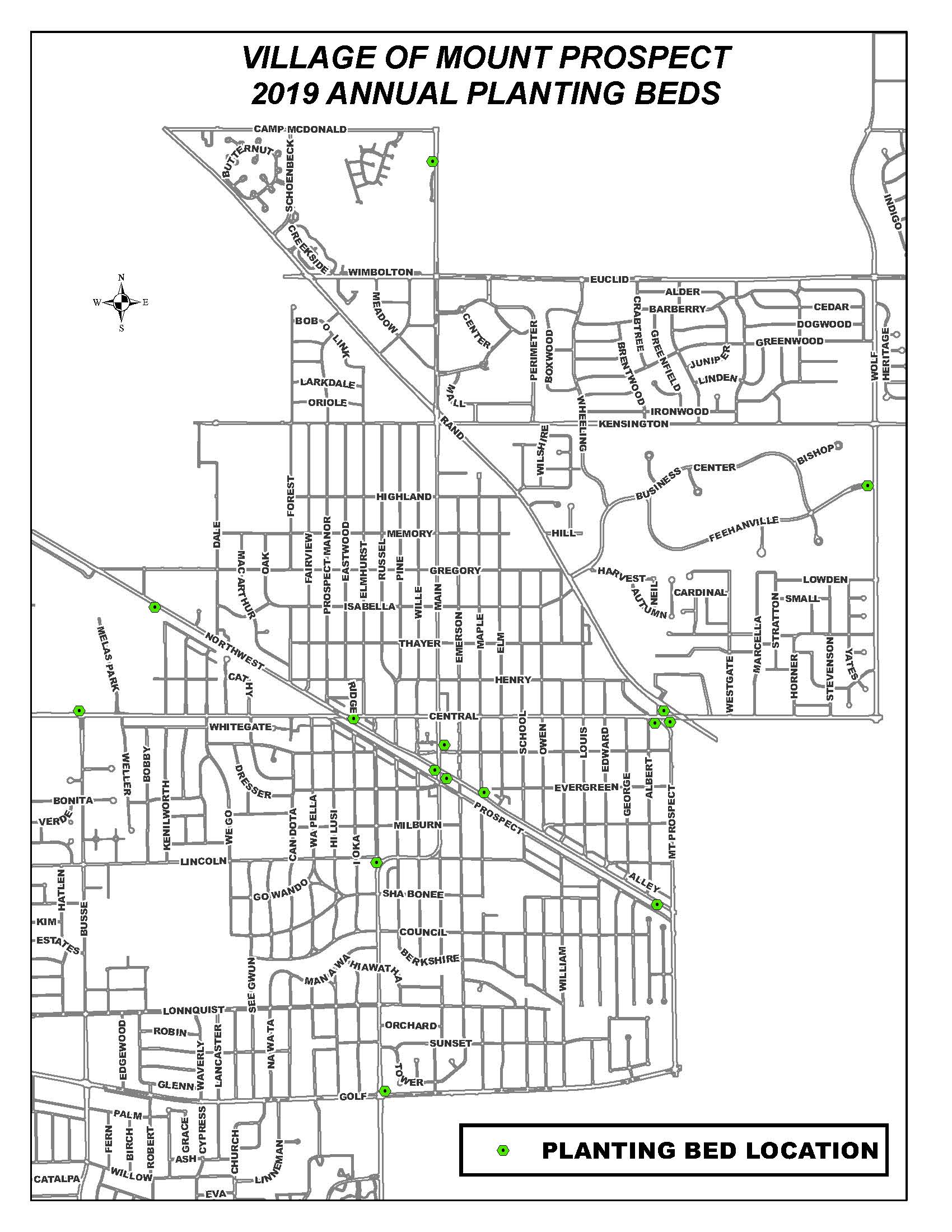 Hanging Baskets
In our downtown area, we have a total of 36 hanging baskets that are 30 inches in diameter on our street light poles which are mounted at a height of 14 feet. The baskets are designed by our Public Works staff in December of each year. They hang from May to October. The growing and maintenance of the hanging baskets is provided by local greenhouse vendors. Currently, contractors are responsible for watering the baskets during the season.
View Full Site