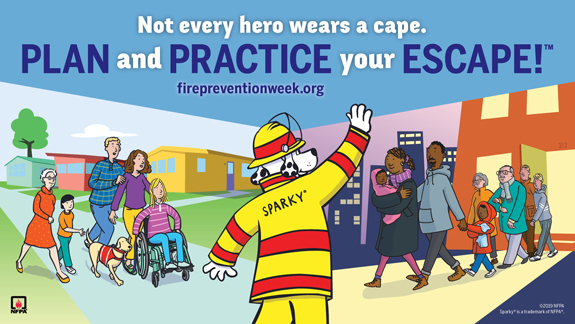 October 6 – 12 is Fire Protection Week. The Mount Prospect Fire Department is teaming up with the National Fire Protection Association® (NFPA®) to promote this year’s Fire Prevention Week campaign, “Not Every Hero Wears a Cape. Plan and Practice Your Escape!”

The campaign works to educate everyone about the small but important actions they can take to keep themselves and those around them safe.

“In a typical home fire, you may have as little as one to two minutes to escape safely from the time the smoke alarm sounds,” said Fire Chief Brian Lambel. “Escape planning and practice can help you make the most of the time you have, giving everyone enough time to get out.”

Fire Prevention Week is observed each year during the week of October 9th in commemoration of the Great Chicago Fire, which began on October 8, 1871, and caused devastating damage.