Mount Prospect Veterans of Foreign Wars Post 1337 is pleased to announce that this year’s Memorial Day Parade and Ceremony of Remembrance will take place on the holiday, Monday, May 27, 2019.  It welcomes all residents of Mount Prospect and nearby communities, especially veterans, to line the parade route and join in the festivities. The parade will step off at about 9:40am from the Village Hall at the corner of South Emerson Street and East Busse Avenue.  It will then proceed south on Emerson Street to East Lincoln Street and from there to the Mount Prospect Veterans Memorial at Lion’s Park.  Leading will be the Mount Prospect Police and Fire Departments, followed by Color Guards of Post 1337 and Mount Prospect Post 525 with their members, marching in formation.  Also appearing, among many others, will be the Keynote Speaker, Sargent Major Thomas Morrissey, U.S. Army (Ret.), the First Place winner of the Post 1337 Memorial Day Essay Contest and the Prospect Knights Marching Band.

The parade concludes at Lions Park (about 10:30am).  Post 525 and Post 1337 member, Bill Starr, Lt. Col. U.S. Army (Ret.), will then welcome those in attendance to the Ceremony of Remembrance and introduce the keynote Speaker. Sgt. Major Morrissey.  His remarks will be followed by placing of ceremonial wreaths and flowers in honor of deceased local veterans, highlighting the members of Post 525 and 1337 who passed away this past year.  The program also will include the announcing of all of the winners of the Memorial Day Essay Contest and presentation of prizes.  Interspersed throughout will be performances of patriotic music by the Marching Knights and the Mount Prospect Community Band.  In keeping with tradition, the ceremony will end with a 21 Gun Rifle Salute, bagpipe music and the playing of Taps. 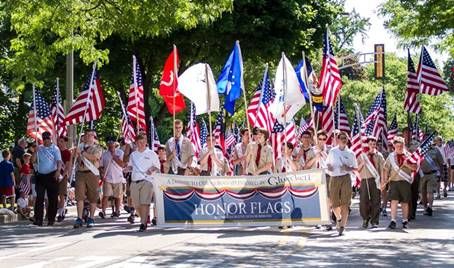